Bridgeway Senior Living joins The Alzheimer’s Association in raising awareness of Alzheimer’s disease and brain health. Alzheimer’s is the most common form of dementia, and it’s become more and more common over the years. An estimated 5.7 million Americans have the disease, costing billions of dollars. Alzheimer’s is rapidly topping the list of fatal diseases, and we still have no cure or means of arresting its progress.

Here’s a handy infographic from The Alzheimer’s Association showing the full cost of the disease: 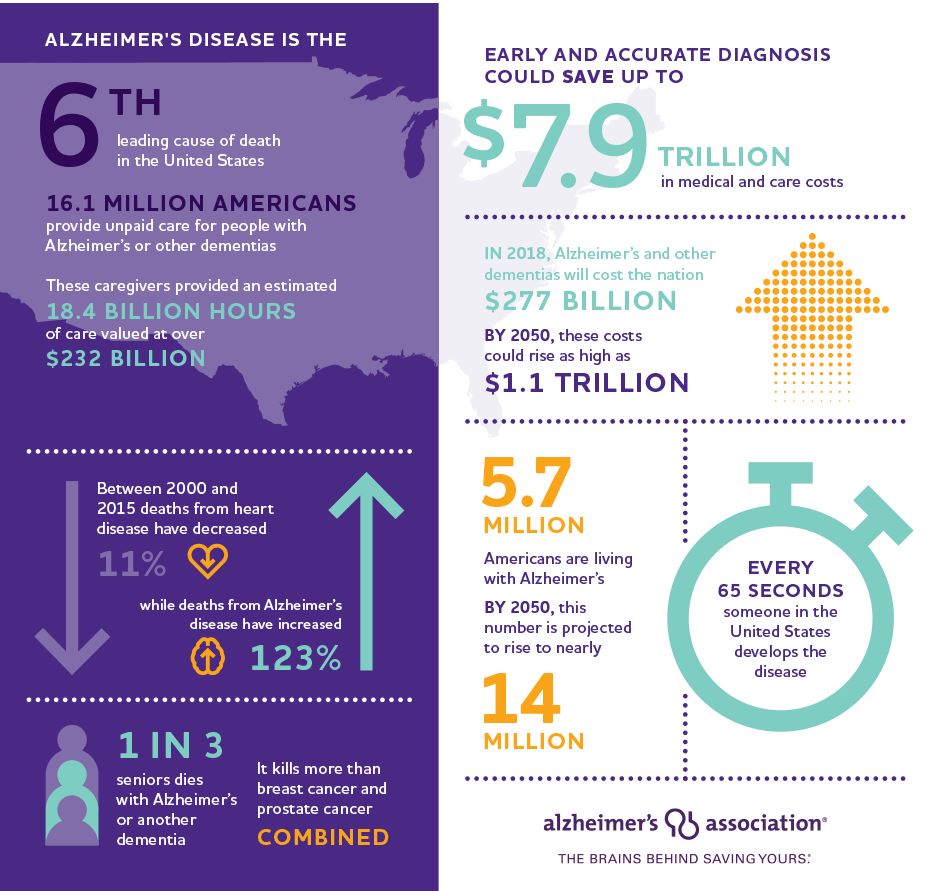 What is Alzheimer’s Disease?

Alzheimer’s is the most common form of dementia. It’s a degenerative brain disease, where symptoms get worse over time. It develops slowly, and often starts as mild forgetfulness that many people chalk up to regular aging.

Science still hasn’t figured out all the workings of the brain, so many aspects of Alzheimer’s still remain a mystery. For example, we still don’t know exactly what causes Alzheimer’s. What we do know is that the greatest risk factor for developing it is age. From 65 and onward, your risk of developing Alzheimer’s doubles every five years. After age 85, your risk is nearly 50 percent.

Alzheimer’s disease kills off nerve cells in the brain, leading to massive tissue loss. Eventually the cortex, the part of brain that plays a key role in memory and awareness, shrivels up and loses most of its function. The disease is ultimately fatal, with lifespan averaging 8 years after symptoms become noticeable.

How to Raise Awareness

Get acquainted with the warning signs of Alzheimer’s disease. It’s normal to forget something you’ve learned recently, but it’s not normal to forget information you’ve known for years. If someone you love is forgetting important details, such as the name of the street she’s lived on for 37 years, encourage her to see her doctor for an evaluation.

For more information about the difference between ordinary forgetfulness and early signs of Alzheimer’s disease, check out our post Forgetfulness: When to Worry.