As we mentioned in our blog post about health awareness months, Pancreatic Cancer Awareness is one of November’s health observances. We feel that pancreatic cancer deserves its own article because it’s so deadly—and doesn’t have to be if it’s caught early.

Pancreatic cancer isn’t particularly common, but it kills more people than breast cancer does every year—even though breast cancer is one of the most common cancers among women. According to the Pancreatic Cancer Action Network, approximately 55,000 people are diagnosed with pancreatic cancer annually. The cancer kills 91 percent of its patients within five years of diagnosis. The main obstacle to better survival rates is that the cancer is usually caught at the latest stages.

Pancreatic cancer spreads silently for months, and it’s usually past the point of treatment by the time it’s diagnosed. That’s why the Pancreatic Cancer Action Network is raising awareness about this deadly cancer. Their goal is no less than doubling survival rates by year 2020.

At Bridgeway Senior Living, we applaud PanCAN’s efforts, and join them in raising awareness. Here are the basic facts of pancreatic cancer: 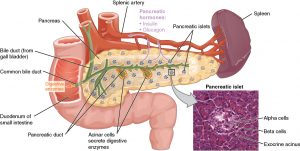 What is the Pancreas?

The pancreas is a six-inch-long gland surrounded by the stomach, small intestine, liver, spleen, and gallbladder. Because it is located deep in the abdomen, it’s nearly impossible to feel pancreatic tumors in a physical exam.

An essential part of both the exocrine and endocrine systems, the pancreas’s two main functions are assisting digestion and blood sugar regulation. The pancreas is most famous for its second role, especially for the production of insulin—the hormone that lowers blood sugar levels. Insufficient insulin is the main cause of diabetes, which happens to have its own health observance this month.

What is Pancreatic Cancer?

The cancer begins when abnormal cells begin to grow out of control in the pancreas, and form a tumor. Tumors can be benign, which means they can not spread to other areas of the body, or malignant, which means they grow out of control and spread to other organs and tissues. Pancreatic cancer most often spreads to the abdominal wall, bones, liver, lungs and/or the lymph nodes.

What are the Risk Factors of Pancreatic Cancer?

We don’t have enough research to definitively point to specific risk factors of the cancer. Up to 10 percent of cases appear to be hereditary, so you are considered to be at higher risk if you have:

An individual can also be at higher risk if they have certain long-standing medical conditions or lifestyle habits. These include:

Ethnicity and gender also play a role; African-Americans and Ashkenazic Jews are more likely to develop this cancer, and males are also slightly more likely.

Remember that risk factors do not mean that everyone who has them will develop the cancer, or that everyone who develops the cancer has one or more of these factors. Also, we don’t have control over many of these factors. The best way to avoid any disease is to quit smoking or not start in the first place, keep your weight at a healthy level, eat a wholesome diet, and exercise.

If you have a strong family history of pancreatic cancer, consult a genetic counselor to determine your risk and whether regular screening is appropriate for you.

What is the Future Outlook for Pancreatic Cancer?

The Pancreatic Cancer Action Network has invested millions of dollars in research to advance medical breakthroughs in the fight against pancreatic cancer. Because it isn’t one of the most frequently occurring cancers, its research was receiving very little funding. Since 2010, there have been many advancements in pancreatic cancer research, and ongoing clinical trials. PanCAN is hopeful that they will meet their goal of doubling current survival rates—standing at only 9 percent today—by 2020.